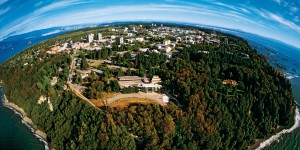 The City of Vancouver and the University of British Columbia today released a KPMG study that shows the employment and population of the UBC/Broadway corridor will grow by 150,000 in the next 30 years and a rail-based rapid transit system is needed to meet the corridor’s population growth and significant economic potential.

“The economic potential of the UBC/Broadway corridor is tremendous,” Mayor Gregor Robertson said. “The health care, technology and life science sectors, combined with UBC’s research enterprise, set the stage for significant growth. We need a subway rapid transit system that will allow us to compete with tech hubs like Toronto and New York City and unleash the additional economic and investment potential along the corridor.”

The UBC/Broadway corridor, which runs from Commercial Drive to UBC’s Point Grey campus, is B.C.’s second largest business and innovation area and North America’s busiest bus route. More than 200,000 people currently live and work in the area and 50 per cent of the corridor transit riders currently come from beyond Vancouver.

“UBC has helped transform this corridor into one of North America’s fastest growing life science and technology clusters and contributes billions to B.C.’s economy annually,” said UBC President Stephen Toope. “As a region, we must act to support the continuing development of this area so Vancouver, Metro and the whole province can capitalize on these significant economic benefits.”

UBC, the province’s third largest employer with 13,900 jobs, anchors the corridor. With an economic impact of more than $10 billion annually and 152 spin-off companies, UBC is a global research and innovation leader. It attracts $550 million in research funding annually, much of which is expended along the corridor, and is a primary driver of B.C.’s life sciences and technology sector, which is growing twice as fast as the balance of the province’s economy.

Vancouver Coastal Health and BC Cancer Agency operations along the corridor create the largest health care/life sciences precinct in the province and bring an estimated 10,000 workers to the area. Vancouver Community College, on the eastern part of the corridor, has 6,000 students.

The KPMG report, prepared for the City of Vancouver and UBC, recommends a rail-based rapid transit system be built to serve the rapid growth of the corridor, and the City and UBC collaborate in areas of common interest, including technology, commercial planning, and transportation to promote development along the UBC/Broadway corridor.

The report further notes the UBC/Broadway corridor is the key geographic connection between Vancouver’s central business district and regional business centres and communities in Metro Vancouver, but it needs rapid transit to better link it to the region.

The executive summary can be found here: Executive Summary – The UBC-Broadway Corridor – Unlocking the Economic Potential

Key study findings:
• A high-capacity, fast, reliable, rail-based rapid transit system is needed to connect essential research partners and job centres to meet the corridor’s population growth and significant economic potential.
• The corridor is growing faster than previously projected, with employment and population expected to increase by 150,000 over the next 30 years.
• The corridor is the second largest job centre in the province after Downtown Vancouver and has more jobs than the next eight Metro Vancouver town centres combined.
• The corridor lacks adequate transportation to meet the current and future economic and population needs of the city of Vancouver and UBC.
• Without investment in rail-based rapid transit along the corridor, B.C.’s health and technology sectors will be at a disadvantage to attract talent, venture capital, and businesses because of increasing gridlock and transit under capacity.
• Cities such as New York, London and Toronto have a competitive advantage over Vancouver: they have a public transportation network that provides subway rapid transit between their major employment centres and their academic research facilities.
• In addition to the need for superior transit infrastructure, the corridor needs stronger collaboration and strategy among stakeholders to leverage economic development and enable affordable new commercial and residential space.

Current transit limitations:
• Broadway is the busiest bus corridor in North America, carrying over 100,000 transit riders per day, twice the ridership of the SkyTrain Millennium Line and equal to the Canada Line.
• During peak times, current bus transit is insufficient to meet demand, with an estimated 500,000 pass-ups by Broadway’s 99 B-Line bus annually (2,000 daily).
• Fifty per cent of corridor transit riders come from outside of Vancouver.

Jobs and innovation:
• After Downtown Vancouver, the corridor is the largest business and innovation centre in the province, with more jobs and people than any other town centre in the region.
• The corridor includes UBC, BC’s largest and most globally significant and research-focused university, and has the largest health care/life sciences precinct in the province, a key driver of the economy.
• Ranked 30th among the world’s top universities, UBC leads Canadian universities in technology licensing revenues, is the province’s third largest employer, attracting 71 per cent of B.C.’s $755 million in sponsored research funding.
• The corridor shares key qualities of leading global technology centres such as Toronto, San Diego and London, namely, a leading university, nearby business, health and financial services, a technically skilled workforce and high quality of life – but this potential is constrained by the lack of high-capacity, rapid transit.
• The combined commercial/institutional floor space in the corridor is almost equal to that found in the Downtown and is experiencing significant growth.