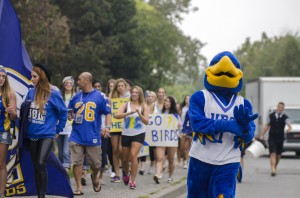 Today I want to announce several new steps we are taking in response to feedback on the sport review, to confirm how vital this review is to the future of UBC Athletics and why, and to set the record straight on several fronts.

There have been recent stories in the media driven by the passion of some of our supporters, including alumni and donors, who have invested tirelessly in the excellence of Thunderbird sports. And I welcome their passionate interest. The media stories however contain fundamental misunderstandings — which I will address shortly — to question the validity of our review.

Let me be clear. This review is vital to the future health of UBC Athletics. The University simply cannot sustain excellence for 29 varsity teams into the future on our current or likely future budget. Shouldn’t we be thinking about how to not only preserve but also to enhance UBC’s storied athletics reputation?  Is it not our duty to make sure our student athletes get what they need to reach their full potential? Isn’t it our responsibility to do all we can to improve campus pride and attendance at games? My answer is: of course, to all three.
UBC announces new steps
As we move forward, I want to assure you that we have been listening to feedback about the implementation of the review and support for athletics. I welcome alumni and donors into the discussion. I am today announcing three new steps:

1. Some of our valued stakeholders have suggested there could be stronger representation on key decision-making bodies. I am announcing today that we are increasing membership on the advisory body for the review to include two more representatives from our sports alumni community.

2. There has also been concern raised about the uncertainty the process is creating for recruitment and planning of our varsity sport programs. I have therefore asked the advisory team to do everything possible to expedite the evaluations, without jeopardizing the integrity of the process. We will aim to announce the results of the first stage of decisions by mid-January – so teams that meet the criteria for varsity status will know by then. A second stage will follow for unconfirmed teams that allows them to develop a framework for meeting the criteria – a final decision for these teams will be made by late February.

3. Finally, I am announcing today that UBC will continue to provide central matching funding for the Millenium Breakfast of $300,000 per year. There was never any intention to cancel funding. But I want to be clear that the Athletics budget will not bear this cost. This breakfast has helped fund important student athlete scholarships since 1999, and I am proud to say this will continue through the provision of central resources.

Setting the record straight
Now, some may continue to disagree with the sport review, but they should not do so on the basis of misinformation. Let me deal with four areas of confusion.

This review is coming out of nowhere
In 2011, after much consultation, I made a difficult decision not to pursue competition in the NCAA. Based on feedback I received at the time from a very distinguished consultative panel, including the Dean of the Sauder School and the Associate Vice-President, Alumni, I announced a review of UBC’s Athletics and Recreation department. That review was completed in 2012.

One of the recommendations of the review was to develop criteria to determine which sports should qualify as varsity. An expert think tank was appointed to work on this, and it developed a new competitive sports model, which we continue to evolve with feedback.

What has not been widely reported is that during consultations for the development of the model, alumni overall indicated a high level of support for this initiative. I am certainly sorry if some of our key stakeholders felt left out by not being members of that Think Tank committee itself, but not everyone could be a member.

Where varsity teams will fall in the new model
A second misapprehension is about where teams might be placed. UBC’s varsity teams will be assessed and placed in one of two streams— the most competitive UBC Thunderbird varsity level, or a new competitive club level, which still receives UBC support, although on a lesser scale. AMS clubs will also have the opportunity to come forward for assessment into one of these two categories.

So in the next steps of the review, UBC will help teams collect input and submit plans against criteria developed by experts and community input. The sport review advisory team, which will now include the two additional alumni representatives, will then make an assessment on the placement of teams in two stages, hear appeals, and eventually proceed to final recommendations.

Not a “Done-Deal”
A third set of mis-guided suspicions is that “the fix was in” from the start. I cannot emphasize strongly enough that no decisions have been made, either as to how many sports may remain at the varsity level, nor as to which sports will be at the varsity level. There is no secret agenda, and there are no pre-determined outcomes.

Not about “Cost-Cutting”
Finally, some people have said that this is all a cost-cutting exercise that is diverting money from varsity athletics to a broader wellness agenda for UBC. Wrong.  I am telling you categorically: No funds are being cut from the Athletics department budget. No money will be taken from varsity towards recreation or well-being programs.  We are talking about using varsity funds in a more effective way so our student athletes benefit fully from their experience here. We want to provide the best coaching, better sports medicine and physiotherapy, more sports psychology – and link our teams to great UBC research. I want UBC varsity to be an unparalleled experience for our student athletes.

And while the budget will not be cut, we have had open discussions about new partnerships and funding models for teams less able to deliver initially against the criteria, so teams and supporters can know how they might get to where they want to be. This review is not a zero-sum game pitting teams against each other; rather we are committed to working with teams and supporters, and we hope to expand the range of partnerships and support over time.

The primary goal of this sports review is to sharpen the focus on high performance sport excellence, and to expand and enhance opportunities for a greater number of UBC students to participate in competitive sport. Over many years, there has been considerable growth in the number of teams within the varsity sport portfolio, but without a long term strategy.

To put this all in perspective, as Gary Mason mentioned in an article on November 26, 2013, let’s consider the example of University of Washington Huskies, our nearest big-time NCAA neighbour to the south. With all the support of athletic endowments and revenues from media contracts and filling massive stadiums and arenas on a regular basis, Washington supports 19 Varsity teams – we currently support 29 on a much smaller budget

This review is vital to re-focus our future efforts to take our sports to a new level of excellence. In the end, this is all about our students: a commitment to fairly determining what it takes to provide, on a sustainable basis, the proper supports for the very best university sport experience in the country with our most successful teams.

Canadian Interuniversity Sport Women’s Hockey Pilot
In conclusion, let me also say a few words about the external piece of our commitment to the highest levels of excellence in our sport programs. As part of the decision to not apply to pursue NCAA membership, in 2011 I also made a public commitment to make a good faith effort to try to restructure Canadian Interuniversity Sport to better meet UBC’s lofty ambitions.

To that end, over the last two years I have chaired the Canada West Task Force, a group of Presidential colleagues and Athletics Directors from our Canada West regional association. The Task Force developed proposals with the twin objectives of enhancing high performance excellence in Canadian university sport, and keeping more of our top Canadian students who are also talented athletes – too many of whom are flocking to NCAA schools for their athletics programs (over 3,900 last year alone according to our research).

As a result of our initiative, for the first time ever, all CIS Presidents have been invited to meetings to discuss proposals to restructure university sport. At a collegial meeting of Presidents of CIS member universities held last month in Ottawa to discuss our proposals, the group recommended by an overwhelming consensus to support Canada West’s proposal for a High Performance pilot project in Women’s Hockey.

After two years of chairing the work of the Task Force, I can announce progress, just announced today by CIS, that many frankly thought impossible. The subsequent vote of the entire CIS membership has just been announced: the pilot project has been approved, surpassing the steep 2/3 majority that had always thwarted progressive change in the past. The high performance project for Women’s Hockey provides, for the first time in Canadian university history, that athletic programs will be permitted to provide full cost of living financial support to help keep more of our best students in our programs.

The pilot project will see us partner with Hockey Canada, which is committed to work with us to keep more of our best student athletes in women’s hockey; 469 women were identified in 2012 as participating in NCAA hockey programs instead of our own, enough for 14 students on every CIS roster.

CIS has also agreed to eliminate, not just for Women’s Hockey but for all sports, the rule requiring students returning to Canada from the NCAA to sit out a year of competition, which had become a barrier to many students returning to our programs after a disappointing experience in NCAA schools.

This is just the kind of high performance, world class programming involving partnerships that UBC is committed to pursuing in order to provide the best possible experience for our most multi-talented student athletes.