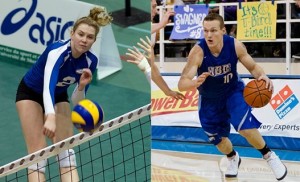 Since 2011, I have co-chaired  a Canada West Task Force, comprised of university presidents and athletic directors from Canada West (CW).  It was struck to develop proposals for restructuring competitive arrangements in CW and Canadian Interuniversity Sport (CIS). The goals are to enhance the competitive environment and level of excellence in interuniversity sport in Canada, and to retain more of the most talented Canadian student-athletes

Nearly 4,000 Canadian athletes are choosing to attend US universities this year. Canada is losing out on multi-talented contributors to campuses and programs, as well as future engaged and successful alumni for universities, communities, and society as a whole. This indicates that CIS is not succeeding in its mission statement to be the destination of choice for Canadian student-athletes. The task force is committed to invoking change to enhance excellence in Canadian university sport.

The Task Force produced a final report which was unanimously endorsed by all Canada West member universities and was presented at the CIS Annual General Meeting in June 2012.  Highlights of the final report include commitments to:

•    Improving student-athlete support (academic and financial), enhancing the level of competition, and improving opportunities for excellence in student development.
•    Exploring the development of high performance competitive structures on a sport-by-sport basis.
•    Providing adequate cost of living support for students competing at high performance levels.
•    Exploring options to enhance high performance support, training, and competitive opportunities for elite level athletes in Canadian universities through partnerships, such as with Own the Podium and partnerships with national sports organizations.

In November 2012, I co-chaired a meeting of CIS presidents to discuss the commitments within the final report. As a result of this meeting, I anticipate continuing discussions among CIS University presidents, and for proposals for pilot projects to promote Canada as the destination of choice for high performance Canadian student-athletes to be considered at the CIS Annual General Meeting in June.

While I cannot be certain of the outcome, I am cautiously optimistic that the changes to which we remain committed will be realized, either in whole or in part. I will provide a further update to our UBC Thunderbird alumni and friends, and wish to thank you all for your continued interest in UBC’s efforts to improve Canadian university sports opportunities.