Office of the President
Home / Homepage Feature / 2017 / November / 27 / The Blue & Gold campaign: Change their world so they can change ours

The Blue & Gold campaign: Change their world so they can change ours 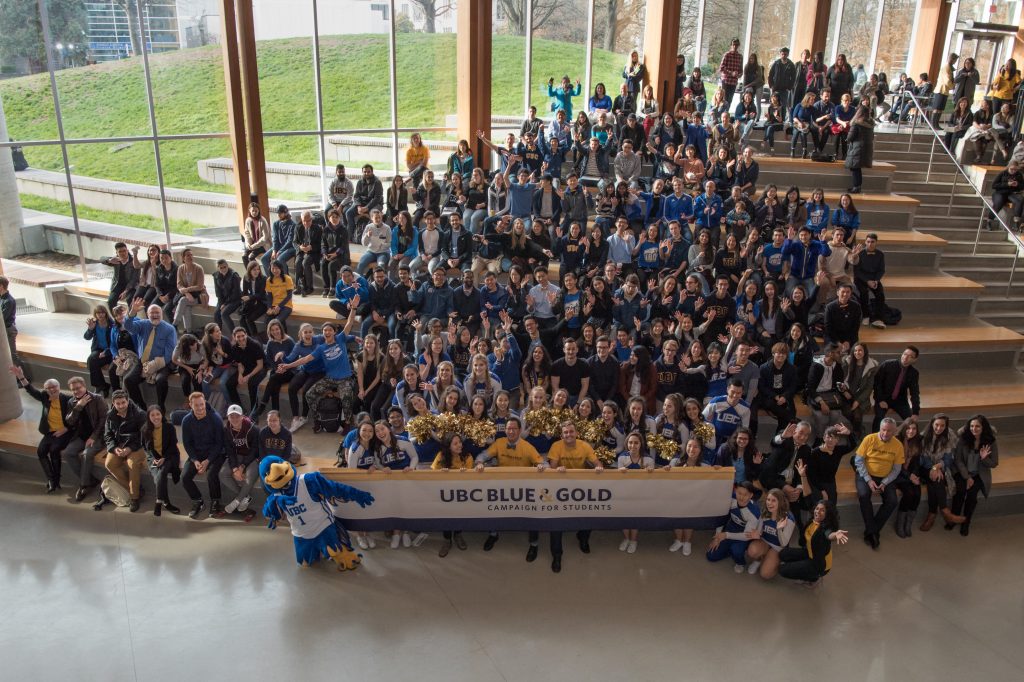 Launching the Blue & Gold campaign with UBC Vancouver students at the Nest. (Photo by Martin Dee)

Earlier this year, I wrote in this space  that we need to support the UBC students who are determined to make a better world. As I wrote at the time, “Thank goodness for the dreamers among our world’s youth. It is because of them that I remain hopeful about the future of Planet Earth.”

But the dreamers need our help in order to build a better future – to take on cancer, to solve climate change, to fight injustice.

Each of our 60,000+ UBC students is uniquely talented, but not all have the same opportunities. To realize their potential, many promising students need our support to access a life-changing education.

That is why UBC has created the Blue & Gold Campaign for Students, with the goal of raising $100 million in student support over three years. I helped launch the campaign, along with AMS president Alan Ehrenholz and 2nd year science student Tasha Jollymour, at the Nest earlier today on the Vancouver campus. (The campaign was simultaneously launched at the UBC Okanagan campus by Deputy Vice-Chancellor and Principal Deborah Buszard and UBCSUO President Trophy Ewila.)

It was moving to listen to Tasha describe how a UBC scholarship is helping her to achieve her dreams. It was uplifting to feel the energy and enthusiasm of the hundreds of students gathered in the Nest.

There are other stories like Tasha’s. For example, second-year student Regan Oey, says a UBC Centennial Leaders Award has allowed him to come to UBC to study cognitive systems:

“I watched my mom work really hard as a single parent. I didn’t get to see her a lot. I went to high school in Vancouver, but I wasn’t sure if university was even an option for me. This award has given me the opportunity to go to school and pursue things I’m really passionate about.”

“These awards are truly life-changing for students. Every bit, no matter how small or large that you donate is going to have a huge impact on people’s lives. And not just on the students, but on all the people they will affect later in their careers. It’s such a beautiful thing that has such a far-reaching impact within society.”

You can find more information about the Blue & Gold campaign at support.ubc.ca/blueandgold. Change their world so they can change ours.