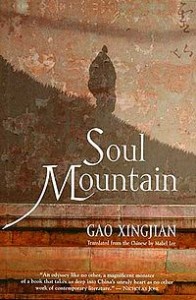 Gao was the first Chinese author to win the Nobel Prize for Literature, although he did so from exile in France.  After the publication of a work dealing in part with the massacre at Tiananmen Square, all his writings were banned in China.  In awarding him the Nobel, the Committee referred to his “œuvre of universal validity, bitter insights and linguistic ingenuity,” and that description is particularly apt for Soul Mountain.  The work was first published in Taiwan in 1990, and it is a partly autobiographical account of a solitary trip down the Yangtze River.  Gao had been misdiagnosed with cancer in 1986, and began a trek tinged with bitterness and a sense of endings.  He uses a mixture of genres, fictionalizing his own experience among minority populations.  The experience of alienation, of being an outsider, is powerful, blending personal sensibility with the lives of people struggling to maintain unique identities at the margins of the dominant Han civilization.  A difficult, but profound, reading experience.