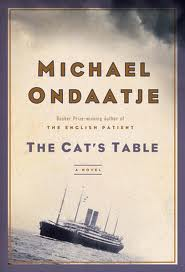 Both autobiographical and fully imagined, this charming novel is Ondaatje at his most playful. Set on a ship travelling from Ceylon to England in the 1950s, the story is told by a writer who is now famous but who was once a passenger on a similar vessel, as a small boy, largely overlooked by those around him. For meals he was seated at the least desirable table in the dining room: the cat’s table, but that table is populated by fascinating characters who begin to reveal to the boy, Mynah (whose real name is Michael), the complexities of adult life. With two fast friends, other boys who sit at the same table, Mynah has free rein of the ship. The autobiography is not contained in details of the author’s life, but in a more subtle and fascinating exploration of how one learns to be a writer. Mynah’s powers of observation grow as he catches glimpses of stories unfolding on the ship and he discovers layers of character in his fellow passengers.