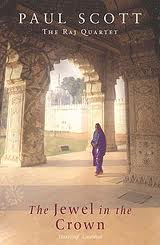 An honest effort to grapple with the harsh complexities of India, and a sympathetic account of people struggling to cope with, and some to overcome, cultural difference. The characters of the British Raj are drawn with sensitivity and compassion, and the story is utterly gripping. A variety of narrative voices give the novel extraordinary range and depth. Worth another look if your memory is clouded by the television adaptation which was beautiful but more of a potboiler than a thoughtful attempt to deal with relationships of power and privilege.