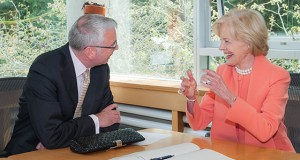 Musqueam Elder Larry Grant formally welcomed the delegation to the Musqueam traditional territory on which the University sits at the Museum of Anthropology, and the Governor General opened a roundtable discussion between Australian and Canadian Aboriginal leaders and UBC faculty members on economic development.