On April 22, I had the pleasure of speaking to members of the Mayors’ Council on Regional Transportation to show support for the Transport 2050: 10-Year Priorities Plan as well as the extension of SkyTrain to the Vancouver campus.

TransLink’s proposed plan for the next 10 years includes a range of transit solutions that support our rapidly growing and changing region, including: 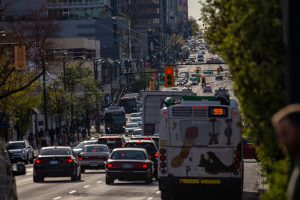 It’s exciting to see the extension of SkyTrain to UBC included in the plan as part of a region-wide network of efficient, convenient and affordable transit connections that is so critical to the university and the communities it serves. UBC students, faculty and staff live in every Metro Vancouver municipality, including more than 5,000 in Richmond, more than 4,000 each in both Burnaby and Surrey, just to name a few.

UBC is a vibrant node within the transit network supporting a diversity of regional activity, and although the population of people who live on campus is growing, UBC will continue to be a transit destination:

No single project, no single infrastructure investment or initiative will solve the transit challenges faced by members of the UBC community. They need a suite of solutions all contributing to a more robust transit network – one that serves all the communities in the region, which is why I support the Transport 2050: 10-Year Priorities Plan and UBC remains committed to the UBC Extension, including exploring a financial contribution to project costs.

SkyTrain to UBC is a much-needed project that will solve major transportation challenges and reduce GHG emissions and open up new opportunities to improve housing affordability in the region. Through our recently launched Campus Vision 2050 planning and engagement process, UBC is preparing for the arrival of SkyTrain on campus to ensure it integrates with the campus environment and enables a sustainable, transit-oriented community.

As we plan for the future of the Vancouver campus, we are also considering UBC’s overall presence in the region, including UBC’s expansion in Surrey – a site that will expand UBC’s programming in the region and add to, and not replace, programs at the Vancouver campus. We anticipate this will lead to net-new transit ridership between campuses and throughout the region, further increasing the need for improvements to the regional transit network, including the UBC Extension.

I look forward to continuing to work with Mayors’ Council and TransLink to advance transit solutions for our region, including the UBC Extension.