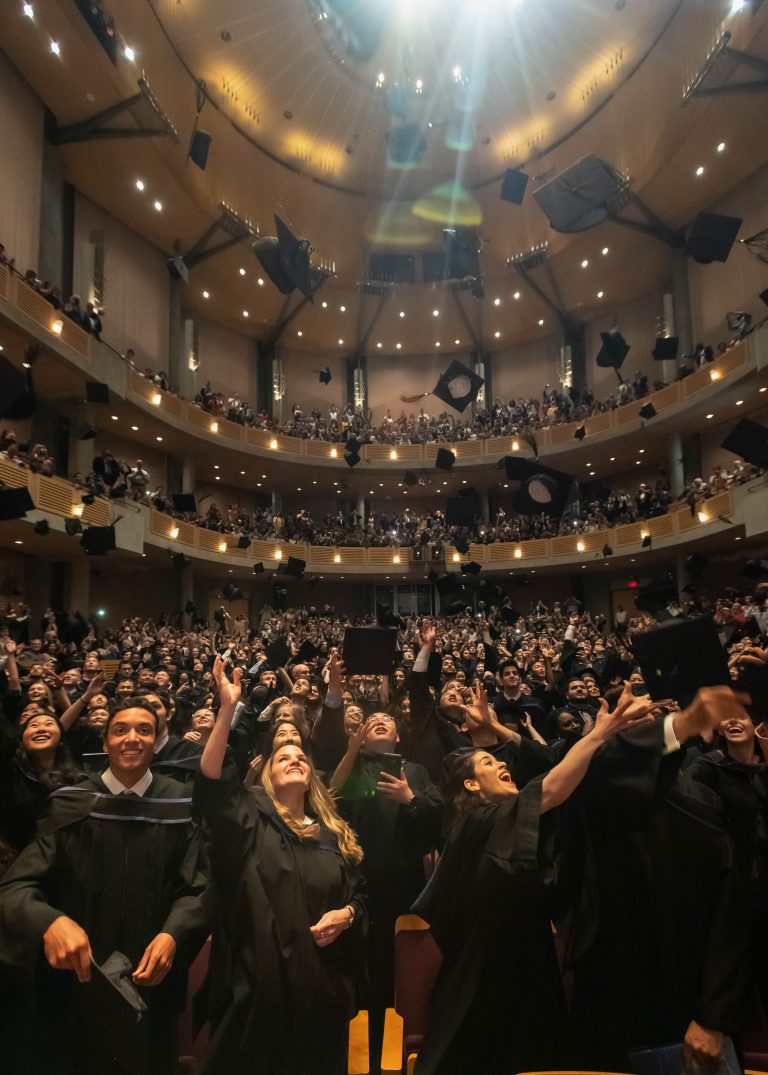 As president of the University of British Columbia, it is my privilege to preside over graduation ceremonies at both the UBC Vancouver and UBC Okanagan campuses. Seeing the joy on the faces of the new graduates and the pride on the faces of their family members is an unforgettable experience. I also have the privilege of addressing the graduates. I’d like to share my remarks this year with you.

Graduation is a time to imagine your future and the world to come. And when you think about the road ahead, you may gain perspective by looking back to where you have been. I hope that when you do look back at your time at UBC that you will do so with fondness and that you will see UBC as very much part of your future. You will always be welcome here. And we look forward to hearing about your personal and professional achievements as you build upon the foundation of your degree and the education that it represents.

We also hope to continue to engage with you as alumni as you embark on new adventures in new corners of the globe. As you begin a new stage in your life and experience, you can be confident that you can and that you will make a difference just as you have here because like UBC graduates who have gone before you – including three prime ministers, many justices of the Supreme Court, Nobel laureates, leaders in every field – you have demonstrated that you have the grit and determination to excel. You’ve proven yourself. And we have absolute faith in you.

In his address to UBC’s initial graduating class in 1916, UBC’s very first president and vice-chancellor, Frank Wesbrook, encouraged them to make the world a better place in which to live not only for themselves and for their loved ones but also for people they might not even encounter. And that has become embedded into the collective DNA of this institution. Today, 103 years later, I echo those remarks. We believe fervently that each and every one of you has the capacity and skill to succeed and to, in your own unique way, make the world a better place.

But then I asked him, “Don’t you appreciate the diversity at this institution, the diversity of your classmates, of your faculty, the views, and the cultures that are represented in this university, which is – let’s face it – a very large town or a small city on any given day?” And he said, “You know, I really just wanted to have some advice from you that I can take with me.”

I felt immediate trepidation. I wasn’t sure that I could give this student any words of wisdom or special advice. But since he had made an appointment to see me and asked me twice to give him some advice, I said, “I will give it my best”, and I’ll do the same with you today in our last official encounter while you are still a student. I need to be honest with you. You will have good times and bad just like you have had during your time at this university, in fact, during your entire life. It is unavoidable. May you have more good times than bad. But when life is challenging or your spirits might be down, try this.

Try to feel what it was like for you then. For me, it was the Kennedy Center for the Performing Arts in Washington, DC when I heard Mstislav Rostropovich conduct the National Symphony Orchestra. I was around nine years old. It’s very different listening to music on a vinyl record or CD compared to hearing an orchestra right in front of you.

Or think back to the first time that you walked into a Major League Baseball park, if you like baseball. You might’ve been a little kid with your father, your uncle, your brother or your mother holding your hand. Remember walking up those steps and seeing that perfect pitch of green grass of the baseball field and seeing so many people; more people than you’ve ever seen before. For me, it was Memorial Stadium in Baltimore. I’ll never forget the thrill of 35,000 people on their feet cheering for The Orioles, brimming with municipal pride for the city of Baltimore. I’ll never forget the crack of the bat hitting the ball as Boog Powell hit a grand slam home run and the entire crowd jumped to their feet in glee.

For some of you, it might have been the first time you went to an NHL hockey game. Remember what it was like to see people sprinting across the ice faster than you could even imagine, ramming into each other and the plexiglass shields, with a kind of sound that you could not even imagine. Remember the sound of the puck hitting the hockey stick and hitting off the goal post and going into that goal. For me, it was the Montreal Forum. Patrick Roy was a rookie goalie at the time, and they would go on to win the Stanley Cup.

Think back to your first fireworks display. Remember how excited you were. Perhaps you were scared when you heard that first firework explode. An explosion that you felt in your very gut. How mesmerized you were to see the shimmering lights above in the summer sky.

Think back to when you rode a bicycle for the first time without training wheels. Remember how proud you were as you looked at your mum and dad cheering you on. You didn’t know it, but they were scared. Probably more scared than you were holding on to your bicycle seat, worrying that you might wipe out when they let go but knowing that it was part of learning how to learn to ride a bicycle.

Think back to the day that you got your driver’s license. That sense of liberation. That time-honored step towards adulthood. Remember that day. Remember how you felt.

Think back to the first time you looked out of the window of a jet plane and looked at the snowcap mountains that are part of this beautiful province or perhaps witnessed the majesty of the Grand Canyon or Niagara Falls (the Canadian side, of course). Think back to the first time that you saw Big Ben or the Houses of Parliament in London or the pyramids of Egypt. I remember I was in awe to come out of the Tube station and to look up at Big Ben glistening in the sun – something more beautiful than I could even imagine could be built.

Think about the first time that you went scuba diving, seeing the stunning biodiversity of a coral reef.

And try to remember, most of all, in each of these experiences, your sense of awe, your look of wide-eyed amazement at the wonders of the world. You see, reliving those moments will likely bring a smile to your face, sunshine to a cloudy day.

But here’s my advice. Beyond looking back, my advice to you is to always look forward to new firsts, to never lose that sense of adventure, that sense of wonder. When the world seems drab as if everything is monochrome, push beyond your limits to experience anew the diversity of colours in this world, the diversity of people, the diversity of cultures, the magic of a world in stereo. The sooner that you realize that the bucket list of things to do in this world is infinite, the sooner you realize there is an endless list of first times for you, endless opportunities to view the world with childlike wonder. You should never be embarrassed of being like a child because being childlike and being wondrous about what you see, that is the secret to being forever young. If you do that, you will live a rich and fulfilling life.