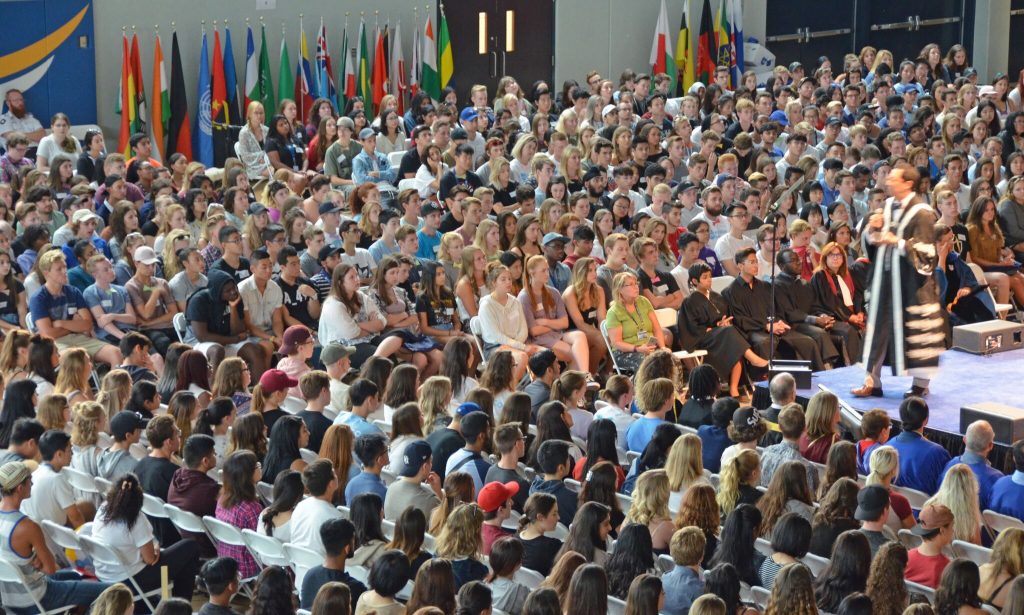 Speaking to the new UBC-O students at CREATE.

As we get caught up in the day to day activities of a busy September, it’s hard to believe that it was just two weeks ago that we welcomed thousands of new students to our campuses at UBC Create and UBC Imagine.

They were joyous occasions. But there were some sobering moments, too.

At UBC Create, the president of the UBC Students’ Union Okanagan asked his peers to raise their hands if they felt the state of the world was healthy. Only one student out of the 2,000 in attendance raised their hand‬. I asked the same question at UBC Imagine of the 7,000 new first year students on the Vancouver campus. I could not see a single hand raised.

Only one student out of 9,000 new UBC students felt the state of the world is healthy.

But when I asked how many were willing and ready to be global change agents to make the world a better place, a deafening YES came back as the reply.

Even though they think that the world is in a bad state, they are not despairing. They are determined to make things better.

Thank goodness for the dreamers among our world’s youth. It is because of them that I remain hopeful about the future of Planet Earth.

But it is patently unfair for us – as adults – to punt our global challenges on to them. Let’s admit that at least some of the world’s grand challenges are self-inflicted wounds. They are problems that we have created as a consequence of self-interest, benign neglect or ignorance. Problems that result from a personal or local view of the world as opposed to one that recognizes a responsibility for a world that transcends borders.

We have a responsibility to address those challenges now and to do our utmost (individually and collectively) to leave the world a better place than what we inherited from our parents. Sadly, we are failing our children (and children around the world) with that most basic responsibility. Let’s all recommit anew our collective responsibility to do so.