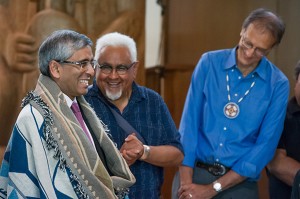 Prof. Gupta was wrapped in a blanket that Musqueam artist Debra Sparrow designed with traditional water-based motifs. Eagle down was then sprinkled over the president and his chin was marked with red ochre.

In an interview afterward, Elder Pointe explained that the blanket’s design is meant to signify UBC’s relationship with water, which like the Musqueam is situated on the shores of the Salish Sea. Moreover, he said the Coast Salish people view water as medicine. “To the Coast Salish people, water is the biggest source of sustenance.”

He explained how eagle down represents the bird’s strength, vision, and hunting ability, and that by sprinkling it over him this was meant to acknowledge Prof. Gupta taking on the biggest leadership role there is at the university.

“It’s a big honour,” said Elder Pointe. “It doesn’t happen all the time.” He added that this was the first time a UBC president had been honoured in this way.

“I am greatly honoured by the gravity and generosity of this gesture,” said Prof.Gupta. “I am also deeply grateful to the Musqueam people and delighted that this is my very first ceremony as President and Vice-Chancellor of UBC.”