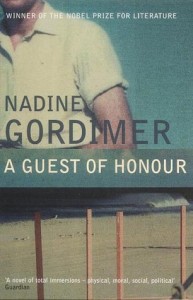 Gordimer’s writing is simply brilliant, but her stories always leave me with a profound sense of sadness.  Winner of the Nobel Prize in 1991, Gordimer is closely associated with the anti-apartheid struggle in South Africa.  But she is no naïve optimist!  A Guest of Honour is the story of a colonial-era British civil servant, Colonel Bray,  who leaves his post in an unnamed African country because he gets too close to the political opposition, the freedom-fighters striving for independence.  Once independence is gained, Bray is invited back by the new President, an old friend, to report on how to improve the system of education.  At first, the novel is suffused with a sense of hope and excitement, but as Bray’s personal life becomes more complicated, so too does the political life of the new country.  Soon, in Chinua Achebe’s words, “things fall apart.”  Those who seemed honourable and good reveal themselves to be craven and hard.  The culmination of the story is shocking.  A fabulous exploration of a “liberal” sensibility confronting the harsh games of political struggle and megalomania.  Sad but beautiful.