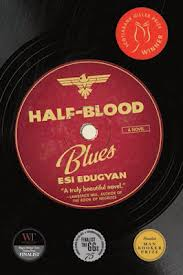 Winner of the 2011 Giller Prize, this ambitious novel is set principally in the months leading up to the German occupation of Paris during the Second World War. Moving back and forth in time, and spanning settings in Baltimore, Berlin and Paris, the narrative focusses upon a jazz combo of African-American and German musicians. They are given the opportunity to meet and impress Louis Armstrong who is visiting Paris. But, given the increasing pressure upon Parisians as the Germans invade, that opportunity results only in one recorded track that features the prodigious talent of Hiero, a black German trumpeter who is almost immediately seized by the Nazis, and who disappears. The narrator is Sid Griffiths, a journeyman American bass player, who it turns out resented Hiero, and who may have betrayed the brilliant youngster. Some reviewers have commended the strange German-inflected American black dialogue. I found it stilted and unconvincing. The plot struck me as similarly contrived, especially the crucial role played by the Montreal-based singer, Delilah, who serves as the catalyst for much of the action but who seems primarily designed to create some explicit Canadian content.