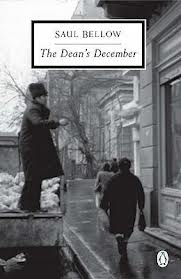 Born in Lachine, Quebec, Bellow became the great chronicler of mid-twentieth century American (especially Chicago) life. Winner of the Nobel Prize for Literature in 1976, his later writing becomes elegiac, and strongly focused on intimations of mortality. The Dean’s December, published in 1982, tells the story of a dyspeptic but relatively happily married dean of journalism at a small Chicago college who accompanies his wife back to Romania where her mother is dying. Just before leaving, the Dean (as he is usually called in the book) has published an excoriating critique of contemporary Chicago life and politics, which has threatened to make him persona non grata at home. But the alienation he experiences in Ceausescu-era Romania causes him to feel utterly outside any society. December in Bucharest is marked by “winter skies, gray pigeons, pollarded tress, squalid orange-rusty trams hissing under trolley cables.” But Chicago is the site of racial hatred, family dislocation, crumbling buildings, and utterly corrupt politics. The book ends with a glimpse of cold stars through a giant telescope. Not exactly fun, but worth the read for brilliant writing and superb characterizations.