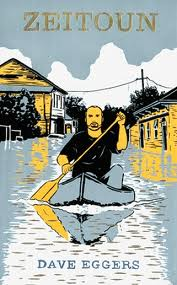 I was first introduced to Eggers through his zany family memoir, A Heartbreaking Work of Staggering Genius, one of the funniest books I have read. Zeitoun is the history of another family, tested beyond all reason by circumstance and bad public policy. The title character is a Syrian-American, married to a “white” Muslim convert. Together they are raising a family in New Orleans while running a very successful construction contracting business. Zeitoun is a deeply proud American, but is closely connected to his Syrian family in different parts of the world. He is also a proud, but not particularly religious Muslim. First the family is torn apart by the fury of hurricane Katrina, when Zeitoun decides to try to stay in New Orleans to help with rescue efforts. Then he disappears for a time as he is arrested on suspicions of terrorism. The book chronicles the interaction of two of the greatest failures of Bush-era US policy and implementation, the post-Katrina disasters of the Federal Emergency Management Agency (FEMA), and the abuses of the so-called War on Terror. A chilling but important read.