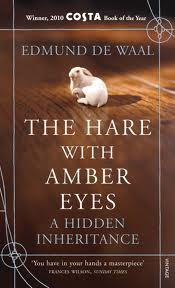 The most exquisite memoire I have ever read. Mr. de Waal, a distinguished English potter, traces his family history by exploring the movement of a collection of Japanese netsuke from late 19th century Paris, to Vienna at the Anschluss, to Tokyo, to London. The collection is first bought by Charles Ephrussi, the model for Proust’s Swann, and de Waal’s great-grandfather. It is transferred to the Vienna branch of the Ephrussi clan, bankers at one time comparable to the Rothchilds, only to be rescued from dispersal during the Second World War. The details are remarkable, the characters vivid, and the historical settings fascinating and sometimes chilling. Could be read as a history of late-nineteenth and twentieth century barbarity, but is redeemed by the gorgeous esthetic sensibility. The tactile realizations are astonishing.