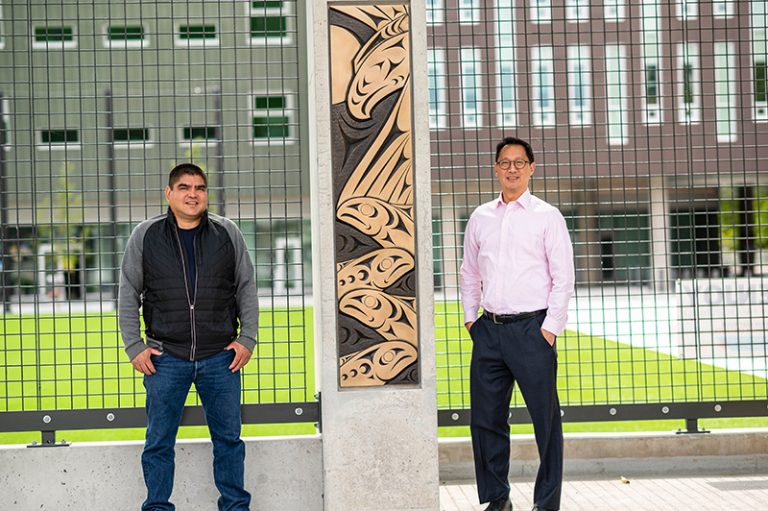 All photos by Paul Joseph | UBC

The installation is comprised of 10 cast bronze panels attached to concrete pillars which are part of a weather protected walkway separating the UBC Bus Exchange from the new MacInnes Field.

The title of the artwork ʔəlqsən is the hən̓q̓əmin̓əm̓ word for ‘point of land’. In his artist statement, Brent explains that “Point Grey” is the English designation for a major point of land within Musqueam territory where many Musqueam village sites are and that include some major villages such as xʷməθkʷəy̓əm and ʔəy̓alməxʷ. 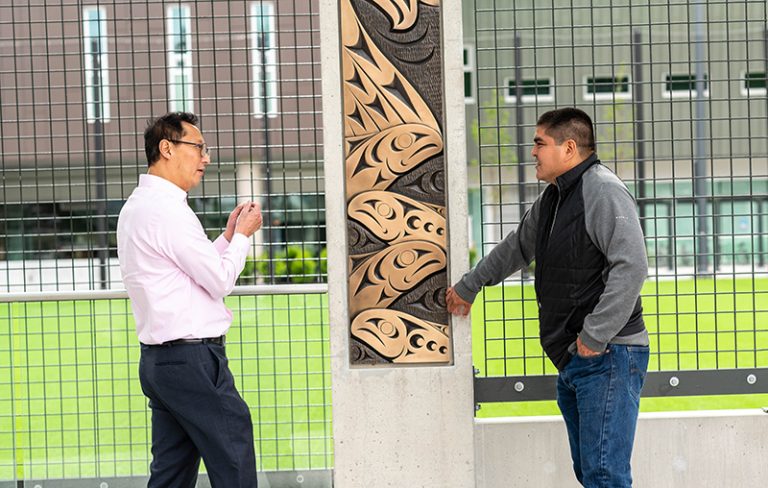 Discussing the symbolism in the panels.

Standing by one of the panels, Brent described to me the process of creating the artwork. Over a two-month period, he carved two, four-foot-tall pieces out of wood. The carvings feature supernatural and natural creatures in a Coast Salish design. On the top of one panel is šxʷəxʷaʔəs (thunderbird) with its sharp beak and atop the other panel is ə́χʷəleʔ (eagle). Underneath the eagle and thunderbird are sce:ɬtən (salmon) and sθəqəy̓ (sockeye). The raised, smooth areas of the beings are offset by darker coloured areas where you can see the marks left by his carving tools. 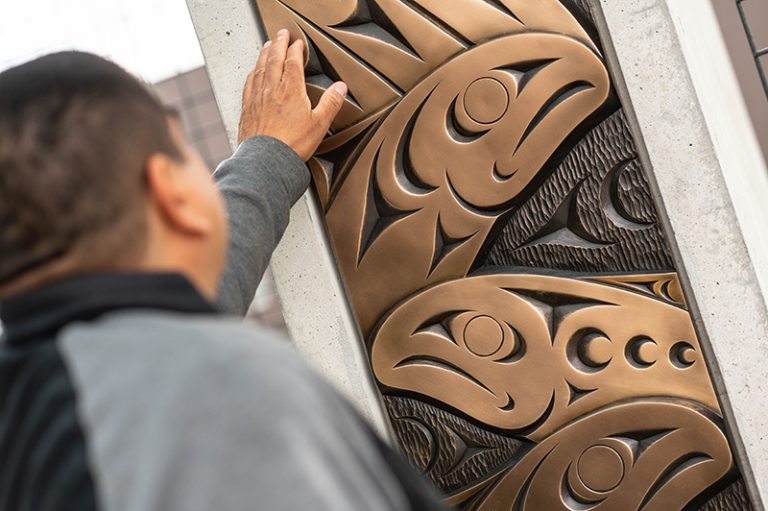 Brent points out a detail on one of the panels.

The symbolism behind the artwork is significant and in his artist’s statement Brent wrote “Eagles, salmon & thunderbirds, together, are uplifting and inspiring: symbols of protection and enlightenment.” 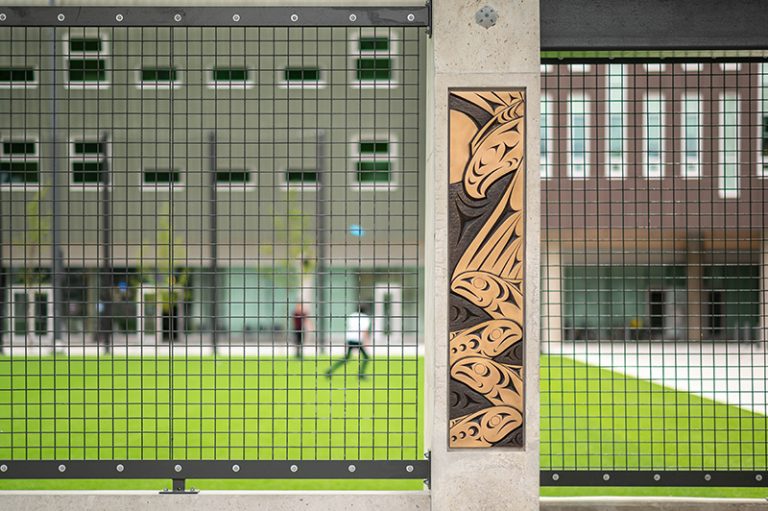 This was Brent’s first time creating a bronze casting from his carvings. In doing so, he follows in the footsteps of his mother, master carver Susan A. Point, with whom he has apprenticed with for years on several major public artworks including pieces for the Seattle Art Museum, City of Vancouver, City of Richmond, Seattle Children’s Hospital, and YVR Skytrain Station. Indeed, Brent utilized the same skilled artisans at Burton Bronze Foundry on Salt Spring Island to make a mold of his carving and cast the bronze sculpture as his mother has used in the past. 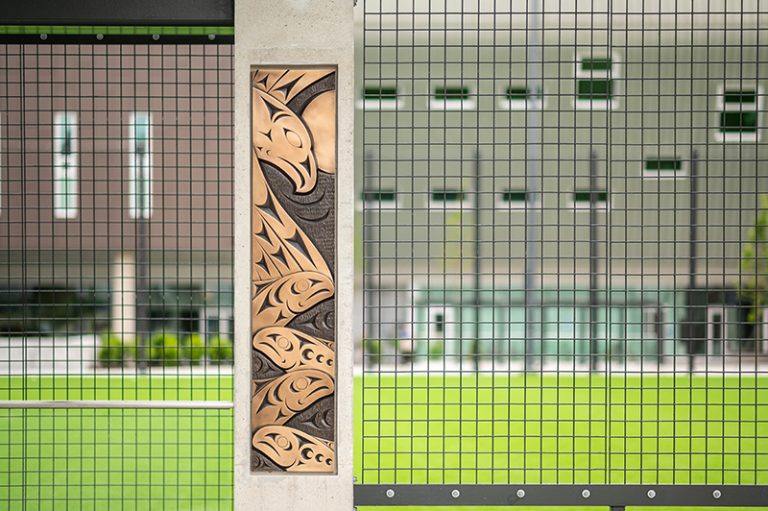 “My mother instilled an awareness and knowledge of my Central Coast Salish Musqueam culture in me. This alone created an inspiration and learning experience she and I share,” Brent said in his artist’s statement. 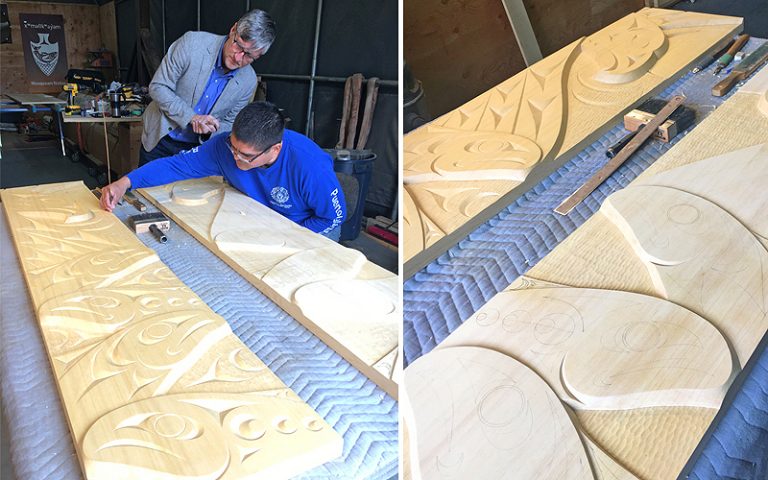 Brent’s name is familiar to many on campus from his amazing house post carvings. These include the Musqueam Post sʔi:ɬqəy̓ qeqən (double-headed serpent post) which stands tall over University Boulevard to welcome visitors. It was installed in 2016 as part of UBC’s centennial celebrations. He also carved the House Post of qiyǝplenǝxʷ installed in front of the Peter A. Allard School of Law in 2012.

Brent’s art concept was selected through a community-based art selection process which included three Musqueam community members including a UBC student. I’d like to express my gratitude to the panel and to Campus and Community Planning for working collaboratively with Musqueam staff, elders and community members to reintroduce Musqueam culture into the campus’ public realm.

In Brent’s artist statement, which I encourage you to read, Brent speaks about the significance of placing the installation at the “gateway” of campus. I hope you’ll have a chance to see the installation up close if you visit campus this summer. Until then, the beings in the panels will be resting and waiting for students, faculty, staff, and visitors to return to campus in the near future.