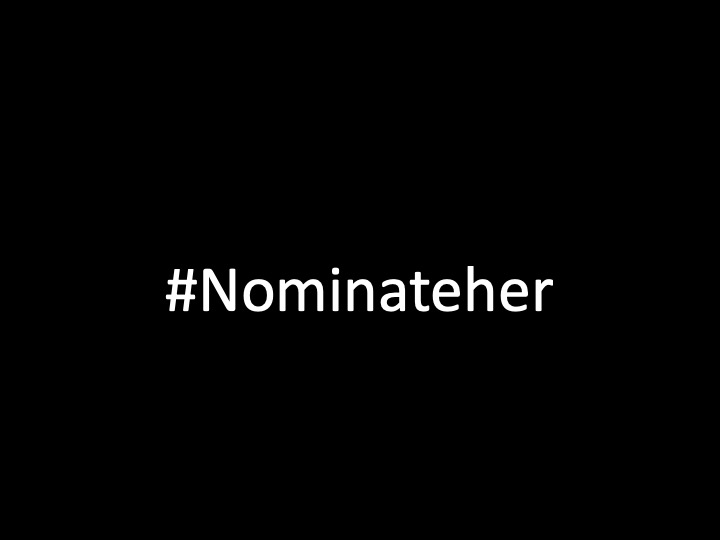 A few days ago, a very kind person indicated that he’d like to nominate me for a major prize. He said he felt I deserved it and that it would bring credit and a spotlight on UBC if I were selected as the laureate. I told him I was very flattered but would rather he think of nominating a younger person, preferably a woman.

I’ve been very fortunate to win more than enough prizes, awards and medals over the years and would rather see others honoured.  Don’t get me wrong, I appreciate every single award I have received and cherish the memories of the ceremonies and dinners that come with the awards.

So, on the heels of International Women’s Day, the topic of my talk today is: #NominateHer 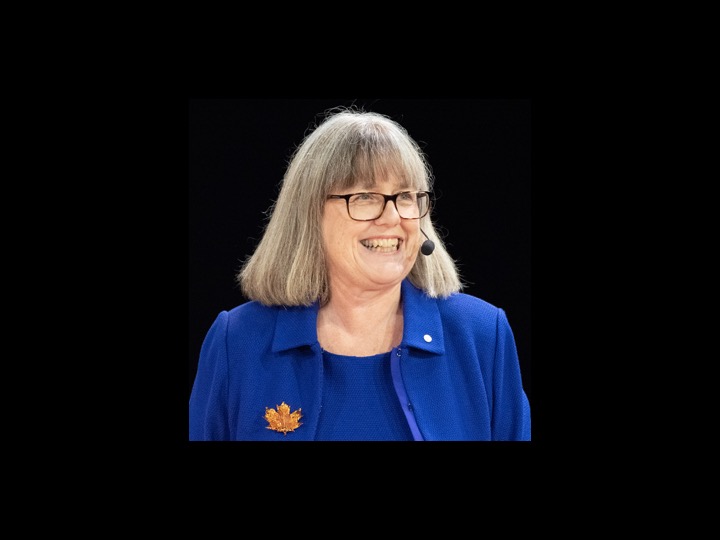 Last year, Canadian optical physicist Donna Strickland won the Nobel Prize in Physics for her work on pulsed lasers. She was the first woman to win in 55 years.

Of more than 900 Nobel Prize winners, only 50 have been women. 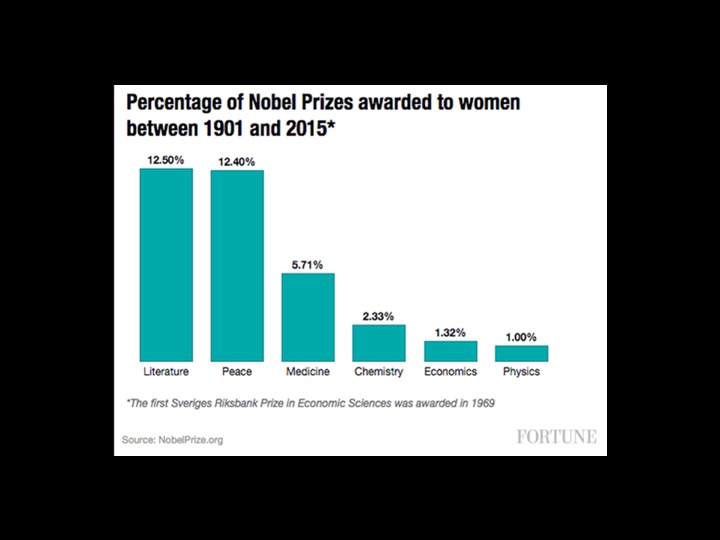 The Nobel categories with the highest percentage of women are literature and peace, at about 12.5% each, only one-eighth of total winners.

In the physics and economics categories, only one percent of winners have been women.

But the Nobel Prizes aren’t the only culprits. 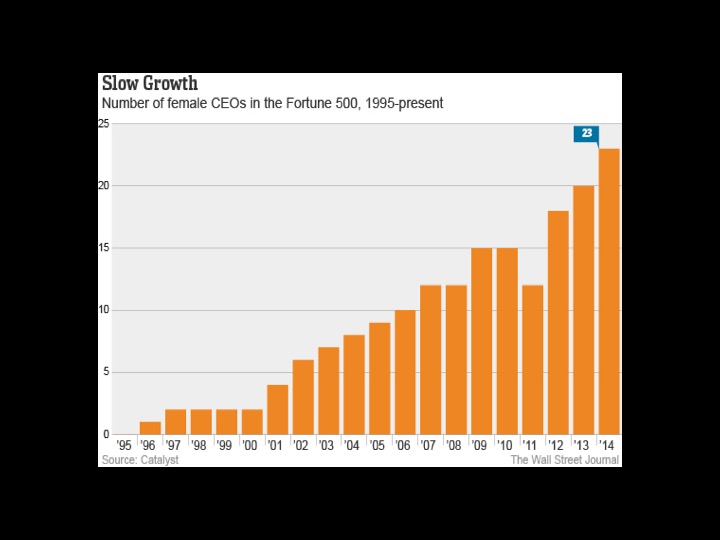 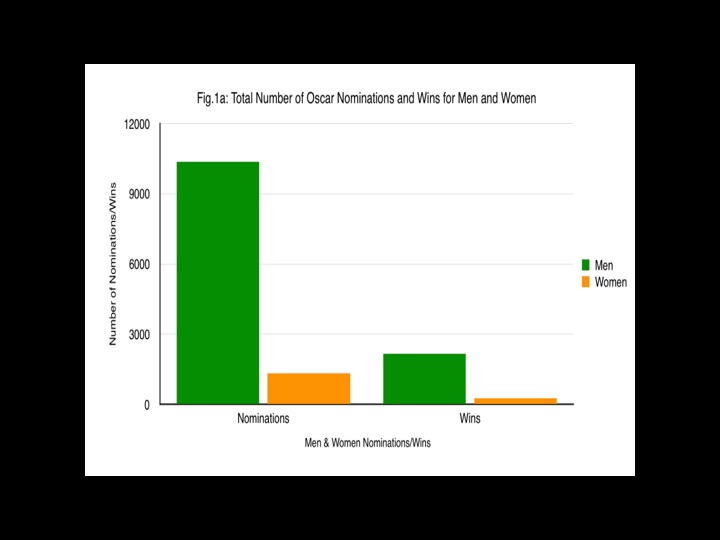 Let’s look at the Oscars. Across all categories, there have been more male winners than female nominees. Kathryn Bigelow is the only woman to win Best Director in the Academy Awards’ entire 90 year history. In fact, only five women have ever been nominated for the Best Director category. Similar numbers are seen in the British BAFTA awards. 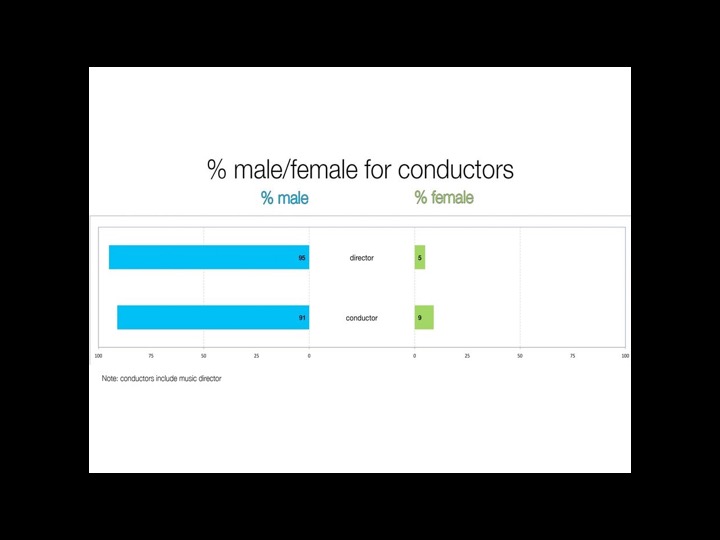 The same biases are at play in the music world.

This graph shows percentages of men and women who have been conductors in US Orchestras. As you can see, only 5% of directors and 9% of conductors have been female. 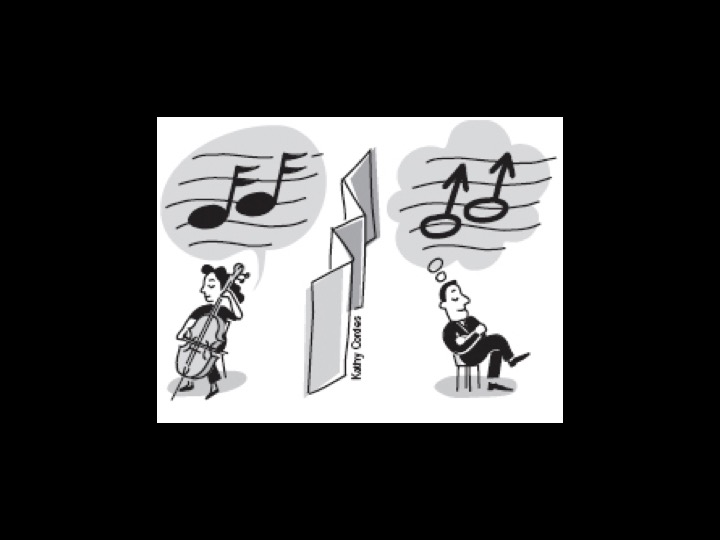 There is a solution: either deliberately nominate women or hold gender-blind selections. I’ll explain what that means in a second.

The number of female performers in orchestras has been rising over the years. This increase can be attributed in part to the use of blind auditions, where candidates and the jury are separated by a screen, making it difficult to identify the candidate’s gender.

Candidates are sometimes even required to remove their shoes, since the sound of heels clacking could identify their gender. This can increase a woman’s chances of making it into the final round by 50%. 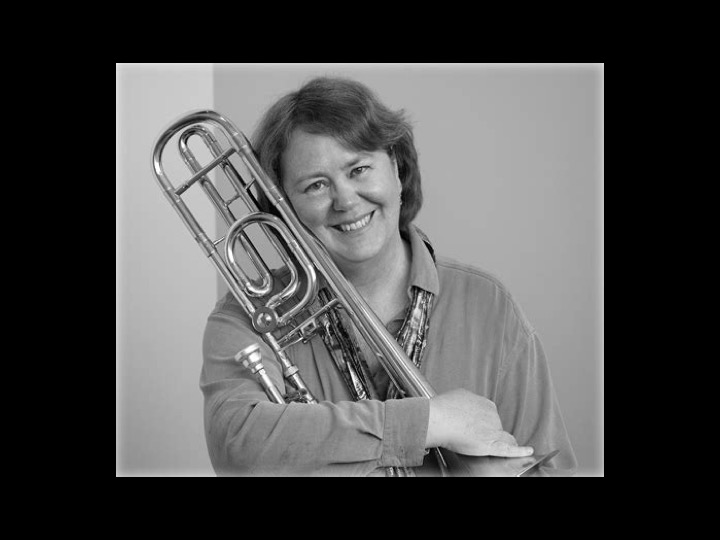 Let me illustrate with an example:

Trombonist Abbie Conant was selected in a blind audition as the overwhelming choice for Principal Trombonist of the Munich Philharmonic Orchestra in 1980.

After her audition, the orchestra’s then Guest Conductor Sergiu Celibidache exclaimed “That’s who we want!”

After they made their selection, the selection committee were shocked to discover their winner, whom they’d mistakenly invited to audition as “Herr Conant,” was a woman. For the next 13 years, Celibidache discriminated against Conant. He demoted her to second trombone and refused to give her solos, claiming that “we need a man for solo trombone.” Conant successfully sued the Philharmonic for discrimination and for back pay when she discovered she’d been paid less than her male colleagues.

You can read more about Ms Conant’s story in Malcolm Gladwell’s Blink. Her story shows that blind auditions can help, but they are not a panacea – women will still face discrimination – subtle and not-so-subtle – even if they do overcome those initial barriers. 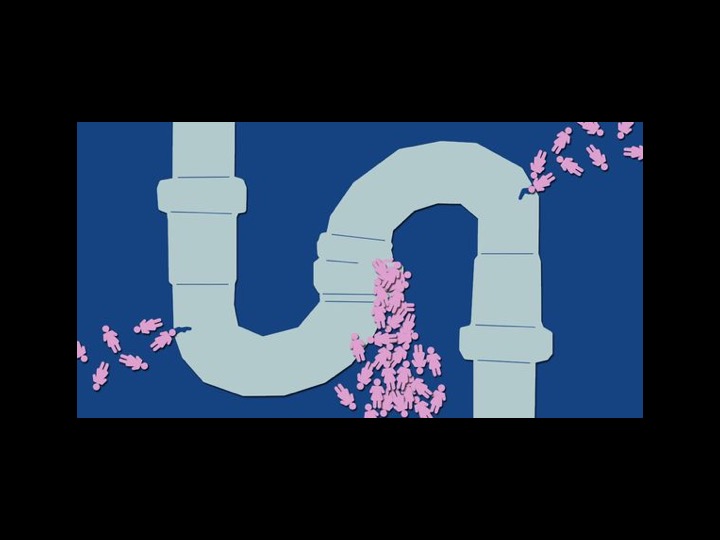 Because of that discrimination – the initial discrimination that causes women to be rejected at the start and the discrimination once they overcome those hurdles – many drop out along the way. This is called “the Leaky Pipeline.”

The Leaky Pipeline is a metaphor used to describe the phenomenon that members of specific demographics do not continue their progression towards certain careers, ‘leaking out of the pipeline’ at different stages. In other words,

The metaphor is that if you pour water (young girls) into a pipe, and it leaks along its length (girls and women exit at various times), very little water (professional women leaders) will emerge at the end of the pipeline.

Therefore, there will be fewer women who have been successful enough to be nominated for awards or honours.

The Leaky Pipeline theory is often attributed to women in STEM fields. According to the National Science Foundation, nearly 50 percent of people currently searching for jobs in sciences or engineering are women. But only about fifteen percent of employed engineers are women. (I would like to add that here at UBC we also make a concentrated effort to focus on retention of women in undergraduate, masters and doctoral levels.)

The problem lies not in the lack of people or ability, but in the refusal to acknowledge and recognize and facilitate these women’s accomplishments. This is best phrased by Dame Jocelynn Bell Burnell.

Dame Jocelynn (who once noted that when she became a professor of physics she doubled the number of female professors of physics in the U.K.) is an astrophysicist who was herself passed over for a Nobel Prize for her discovery of radio pulsars – still a point of major controversy.

She said – ‘If a third of Argentinian astrophysicists are women, it doesn’t seem to me there’s a problem with women’s brains. It’s something to do with the culture in the different countries that produces this enormous change. The limiting factor is culture, not women’s brains, and I regret that it’s still necessary to say that.’ 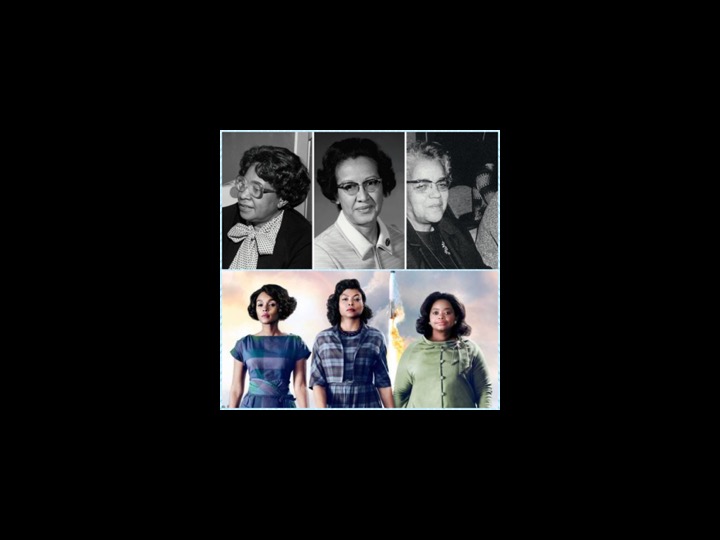 There is a pressing need to challenge gender discrimination ingrained in our culture.

Throughout this talk, I’ve been mentioning some of the countless women who had to challenge discrimination to be recognized for their abilities. Here are some more.

The figures up here may be familiar to some of you. These are Katherine Goble, Mary Jackson and Dorothy Vaughan, along with the actresses who portrayed them in the award-winning movie Hidden Figures. These women, who worked for NASA in the 1950s and 60s, were instrumental in the success of projects such as the launch of Apollo 11.

Hidden Figures, and the Margot Shetterly book it was based on, illustrate the challenges and discrimination these women had to face both working as scientists and in gaining recognition for their work. Katherine Goble was only awarded the Presidential Medal of Freedom in 2015, at 97 years of age. 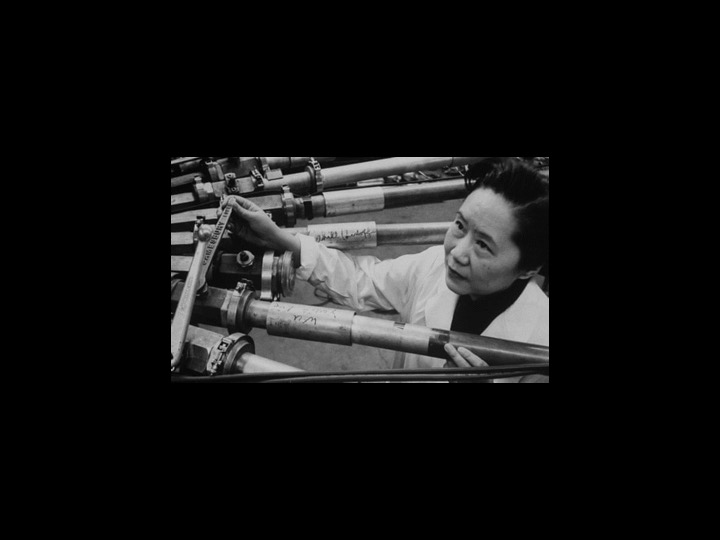 Unfortunately, many other women were not lucky enough to receive credit for their accomplishments in their lifetimes.

Chien Shiung Wu was dubbed the ‘First Lady of Physics’. Her male colleagues, Chen Ning Yang and Tsung Dao Lee, won the Nobel Prize for theorizing that parity may not exist with Beta Decay – while Wu was the one who ended up proving this theory.

Wu remarked, ‘I wonder whether the tiny atoms and nuclei, or the mathematical symbols, or the DNA molecules have any preference for either masculine or feminine treatment.’ 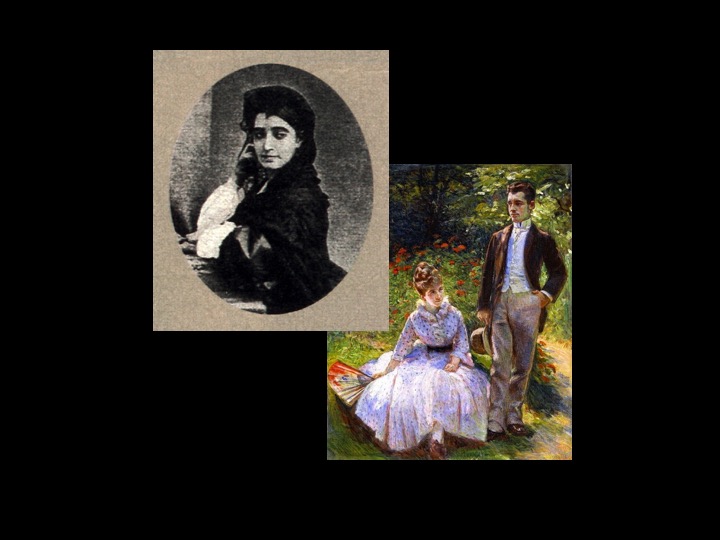 Marie Bracquemond was one of the Les Trois Grandes Dames – three great ladies – of impressionism, along with Berthe Morisot and Mary Cassatt. All three women had to face the challenges of gender discrimination in their time – such as not being allowed out without a male chaperone – but Marie was arguably the most disadvantaged. Not having the financial means or social status, she learned from an old painter in her town, and was largely self-taught otherwise. She married Felix Bracquemond, an artist who was well recognized, more so than Marie. While artists such as Monet and Degas recognized her talent and became her mentors, Felix grew resentful of her talents. Discouraged by her husband’s resentment and the lack of interest in her works, Marie quit painting in 1890. Most of what history knows of her comes from an unpublished short biography written by her son Pierre. 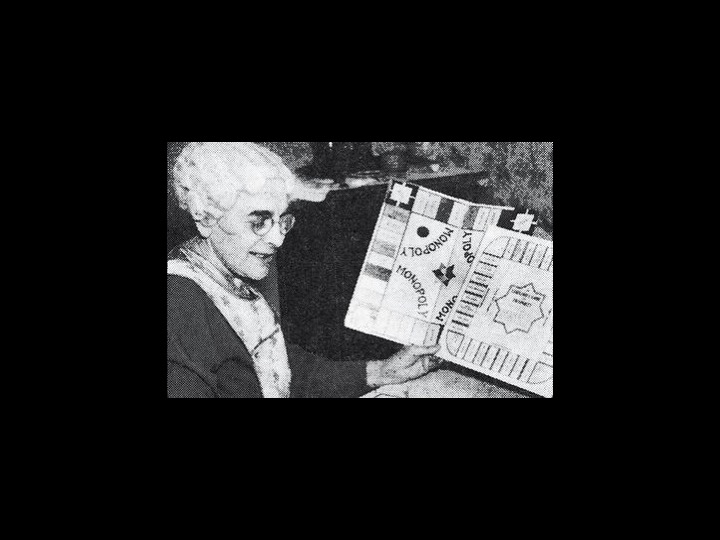 You all know the game Monopoly, even if you haven’t played it. But how many of us know the history of this famous board game?

The stenographer Elizabeth ‘Lizzie’ Magie invented The Landlords’ Game in 1904, as a commentary against big-name monopolists that held a lot of America’s wealth.

Thirty years later, Charles Darrow produced his own version of the board game and sold it to the Parker Brothers. He did not credit Lizzie Magie, and gave the game a new name –  Monopoly.

The Parker Brothers later offered Lizzie Magie five hundred dollars and no royalties, along with the offer that they would produce the original version of The Landlords’ Game with its anti-monopolistic message. Magie agreed, but made very little money since Darrow’s Monopoly was more popular by far. 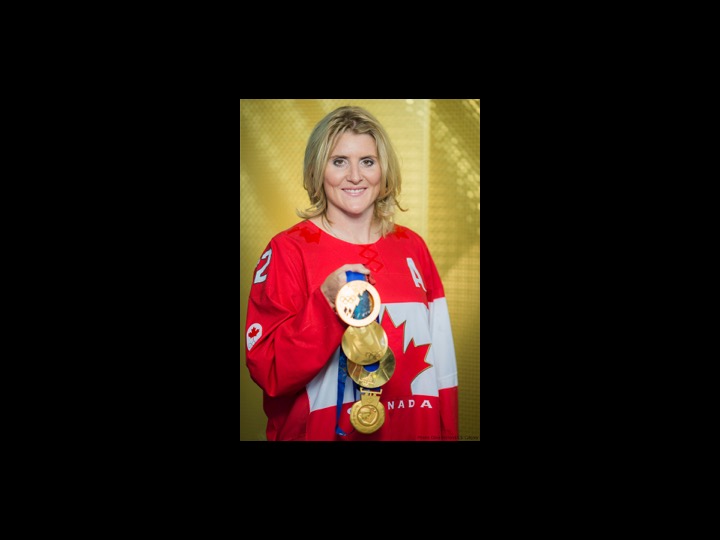 Olympian Hayley Wickenheiser (shown here) is one of those few –she’s the first woman in the NHL to hold an operations role as assistant director of player development for the Toronto Maple Leafs, and she’s part of Canada’s working group on Gender Equity in Sport.

The working group is one of several efforts in Canada and elsewhere to change this situation.

Similar efforts are going on in other fields. But we can’t be complacent. Gender inequality persists in far too many professions. It diminishes institutions, entire regions, nations and the world. Sadly, while clear progress has been made toward gender equity in certain sectors, gender inequality is actually increasing in some parts of the world. And in too many professions, there is little progress here at home. It is everyone’s responsibility, but especially for men in prominent positions, to take action and address the situation.

On a more positive note, while we still have a long way to go, we have been making more steps towards gender equality. Just a couple days ago, I had the pleasure of co-hosting the event Women in Science, Health and Innovation, in conjunction with the Consulate Generals of France, Germany, the Netherlands, Switzerland, UK, US, and Neuroethics Canada.

It was a privilege to meet these amazing scientists and to hear about their fascinating research. I look upon it as a positive sign that opportunities such as this are becoming more common.

But we can’t be complacent. Gender inequality persists in far too many professions. It diminishes institutions, entire regions, nations and the world. Sadly, while clear progress has been made toward gender equity in certain sectors, gender inequality is actually increasing in some parts of the world. And in too many professions, there is little progress here at home. It is everyone’s responsibility, but especially for men in prominent positions, to take action and address the situation. 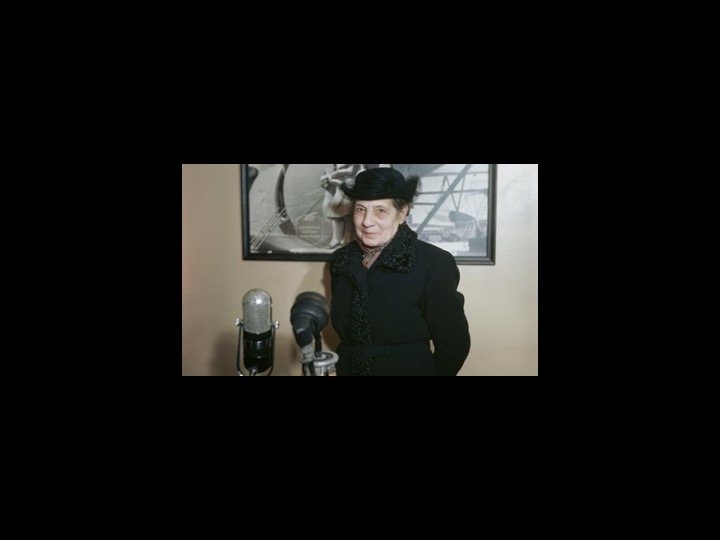 Some men are doing so.

Otto Hahn, the co-discoverer of nuclear fission, nominated his research colleague Lise Meitner for the Nobel Prize over ten times for the same discovery. Other scientists who took the initiative to nominate Meitner include Max Planck, Niels Bohr, Werner Heisenberg, Arthur Compton and Max Born.  But despite the efforts of Meitner, Hahn and other scientists, Meitner never won a Nobel Prize. 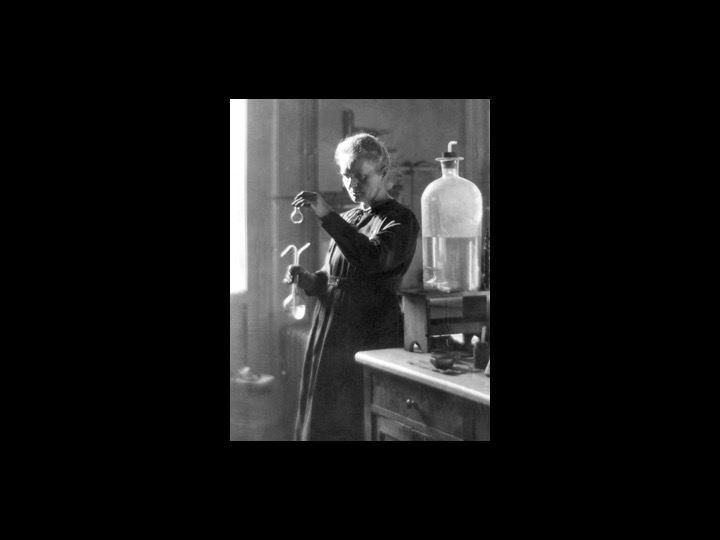 Pierre Curie refused to accept the Nobel Prize unless his research partner and wife Marie Curie was also awarded. This made her the first woman to win a Nobel Prize.

But she was an exception. Only two other women have won the Nobel Prize in Physics in the last hundred years, and only one has won the prize in Economics.

It can seem discouraging, but we can make a positive change. 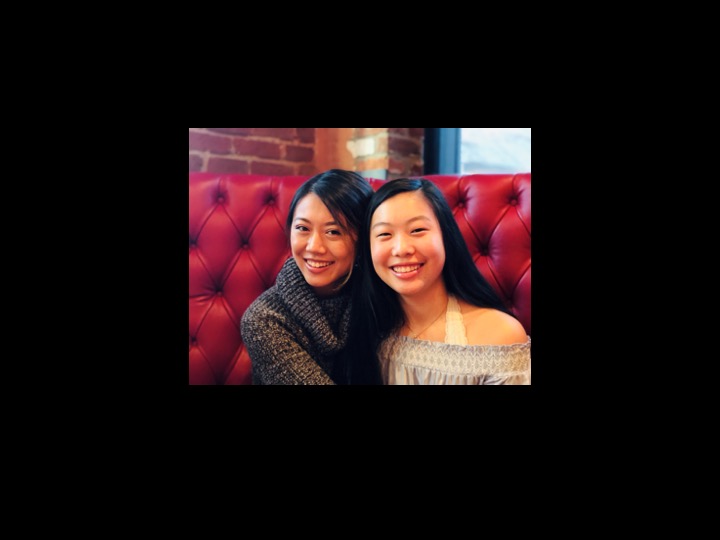 I want my daughters to live in a more equalized world, where they can be acknowledged based on their merit rather than their gender. We must fight for gender equality, so that no woman is excluded or discouraged from a field  she excels in, so that no breakthroughs are lost through the barriers of sexism, and no one who deserves a chance is passed up for their gender.

We owe it to the next generation to take steps to ensure that every girl today can fulfill her potential tomorrow.

Nominate her, not me.