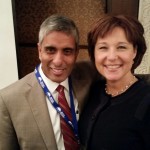 Prof. Gupta with BC Premier Christy Clark in India

“This trip was an excellent opportunity to build on UBC’s engagement in India,” said Gupta. “I’m very excited about the potential to strengthen our research and learning links in the region.”

During the mission, Gupta marked UBC’s long-term engagement with India by announcing a contribution of a quarter of a million dollars in non-public funds to support merit-based scholarships for Indian students entering UBC undergraduate degree programs. UBC will offer 11 Outstanding International Student awards at $10,000 CAD each, and five International Major Entrance Scholarships, valued at $28,000 CAD each to international students from India who demonstrates exceptional academic achievement, intellectual promise and strong community involvement. The first awards will be tenable for September 2015.

“This contribution will help attract India’s brightest young minds to UBC and will enhance B.C.’s connections with India for the future,” said Gupta. “The UBC community will benefit from these students’ perspectives, experiences and talent.”

UBC also renewed an agreement with the National Centre for Biological Sciences in Bangalore. The agreement envisages the exchange of visiting scholars as well as sharing research, information and participating in joint academic conferences.