Office of the President
Home / Blog / 2019 / February / 19 / Raising the Musqueam Flag: Acknowledging the past, recognizing our future responsibilities

Raising the Musqueam Flag: Acknowledging the past, recognizing our future responsibilities 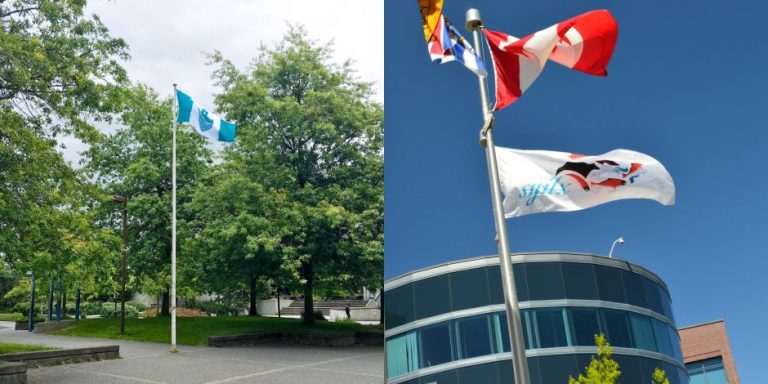 Students, faculty, staff and visitors at UBC’s Vancouver campus may have noticed, and wondered, about the three flag poles standing bare at the foot of Student Union Boulevard.

Wonder no more. On Monday, February 25, three flags will be raised at the site – the UBC flag, the provincial flag and the flag of the Musqueam Indian Band.

The flag raising ceremony takes place at 10 a.m. at the SUB North Plaza, adjacent to the North Parkade (see map below).

The UBC Vancouver campus is situated on the traditional territory of the Musqueam. Flying the flag of the Musqueam Indian Band permanently on campus will be a constant reminder of UBC’s relationship and ongoing partnership with the Musqueam people. It reflects our long-term commitment to the Musqueam Indian Band and our vision of solidarity moving forward. Similarly, at the UBC Okanagan campus, the flag of the Okanagan Nation Alliance was raised in September 2018. UBC Okanagan sits on the traditional, ancestral and unceded territory of the Syilx Okanagan Nation.

Flying the flag of the Musqueam Indian Band permanently on campus will be a constant reminder of UBC’s relationship and ongoing partnership with the Musqueam people.

Musqueam people have inhabited the same territory for millennia. We are acknowledging this past history but we are also recognizing our present relationship with Musqueam and our responsibilities for future actions with Musqueam and other Indigenous communities in Canada and worldwide.

I am honoured and humbled that we will be joined by Musqueam representatives at the ceremony on February 25, and that the flag will be raised by a Musqueam UBC student.

The flag was designed by Susan Point, who calls it a “tribute to the ancestral way of life. The salmon, cradled by the cedar net, is shown inside an arrowhead. This  symbol tells the story of Musqueam as warriors and keepers not only for salmon, but these lands in whole and her people.”

Though UBC’s Vancouver campus only opened in 1925, the Musqueam have lived in this area for thousands of years. Traditionally they caught salmon, eulachon and other fish, hunted and trapped game, and gathered food and medicines from the forests and beaches across what is now called the Lower Mainland.

“Our people have been the ones that have lived on this delta since the last ice age, approximately ten thousand years ago, always living at the mouth of the river,” says Larry Grant, Elder-in-Residence at UBC’s First Nations House of Learning. “As the delta was formed, we moved down and moved down, and we have lived continuously in our community of Musqueam for four thousand years or more.”

The Musqueam Declaration of 1976 defined the community’s traditional territorial lands as including the watershed east of Lions Bay that drains into Burrard Inlet and Indian Arm; and the Lower Fraser west of the site of the Pattullo Bridge extending all the way to Ladner. But the reserve lands assigned to the Musqueam were repeatedly reduced beginning in the 1860s and today, their reserve near UBC is now only 190 hectares— an area that is, in the words of Musqueam curator and writer Jordan Wilson, “postage-stamp small.”

In 2006 the Musqueam and UBC signed a memorandum of affiliation, which emphasized that both “understand the importance of building a long-term relationship.”

A number of initiatives have resulted, such as the Bridge Through Sport program, the Musqueam 101 speaker series, hən̓q̓əmin̓əm̓ language classes and the installation of bilingual street signs that acknowledged the traditional territory of the Musqueam people. The signs are now on nine major campus streets and supplement English names with names in hən̓q̓əmin̓əm̓, the traditional language of the Musqueam people. A Musqueam welcome pole or qeqən, carved by Musqueam artist Brent Sparrow Jr., was dedicated in April 2016 to mark the hundred-year anniversary of UBC.

UBC continues to work with the Musqueam in raising awareness of a post-colonial history of exclusion and marginalization— while creating collaborative educational programs and partnerships to benefit Indigenous people and all Canadians.

The flag-raising ceremony on February 25 will be another step in this journey. Please join us on this important occasion. You can find further information at ceremonies.ubc.ca/musqueam-flag-raising/

Here are some photos from the flag-raising ceremony: 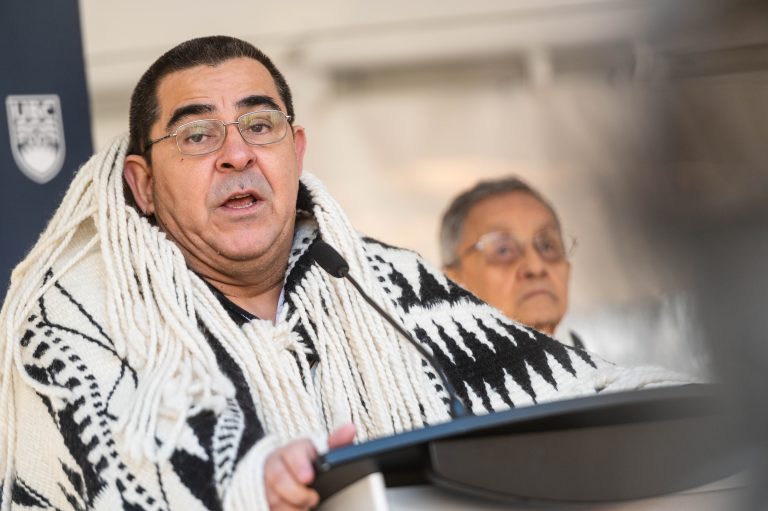 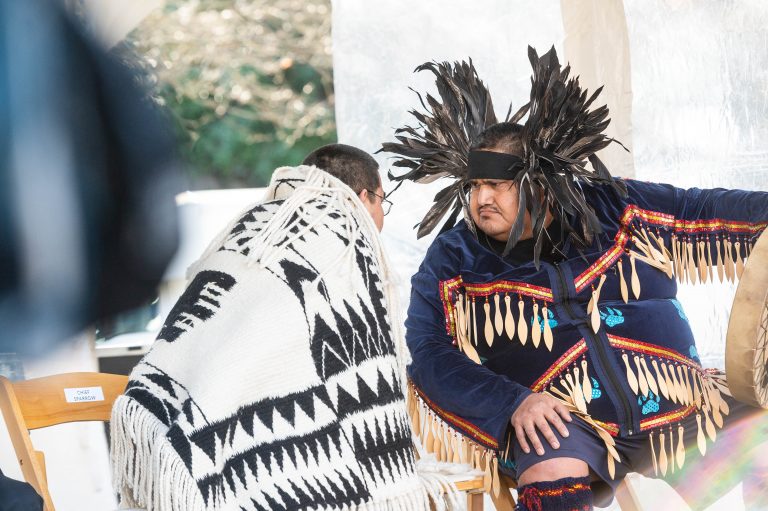 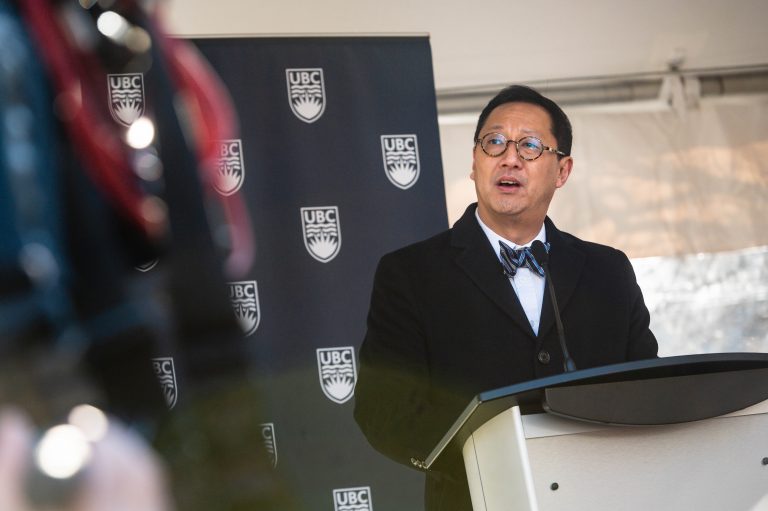 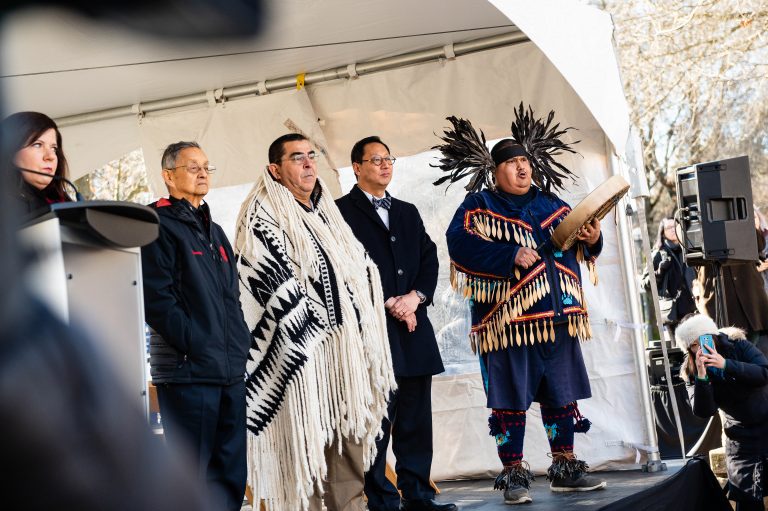 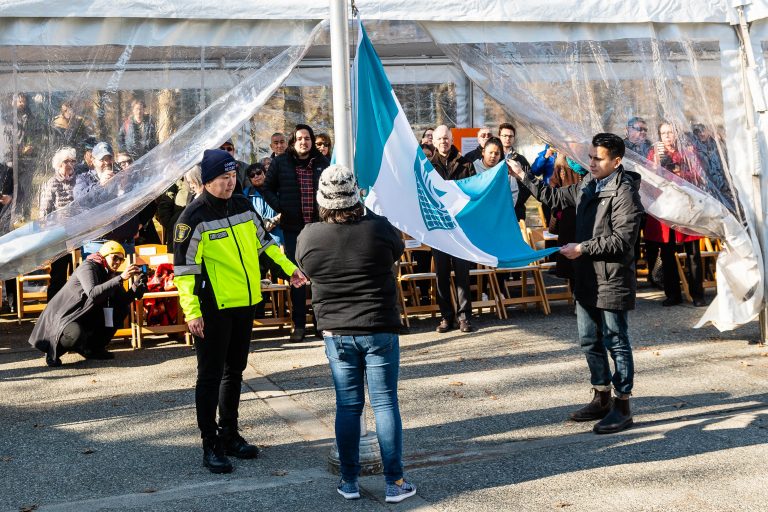 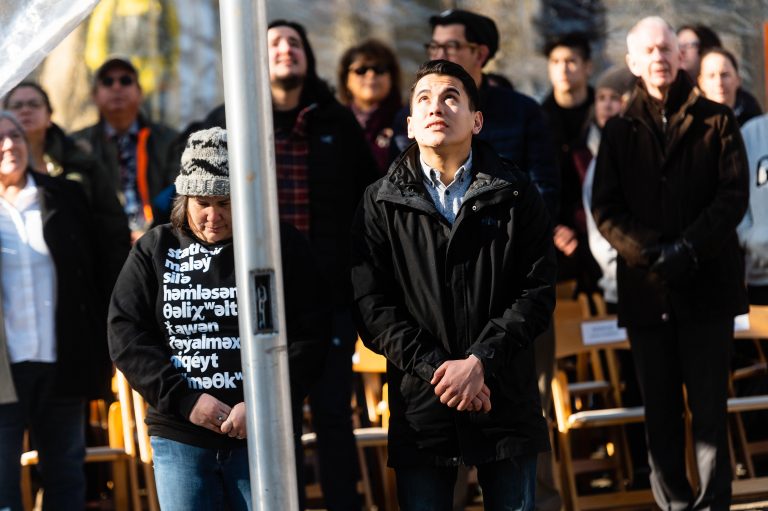