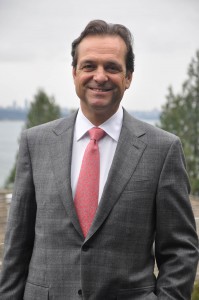 The University of British Columbia Board of Governors has approved the appointment of Pascal Spothelfer as the new Vice President, Communications and Community Partnership. Spothelfer will begin his five-year term starting May 28, 2012.

Spothelfer has extensive international business experience as a management consultant, senior executive and CEO of both privately held and publicly traded companies. From 2007-2011 Spothelfer was President and CEO of the BC Technology Industry Association, where he has been actively advocating for the strengthening of British Columbia’s knowledge economy.

In his corporate career, Spothelfer has worked in Europe for the Boston Consulting Group and Jenoptik AG, before moving to Calgary to lead the restructuring of NovAtel Inc., which as CEO he then took public. After a year as Senior VP Strategic Development for Teekay Shipping in Vancouver, Spothelfer served for seven years as President and CEO of Spectrum Signal Processing in Burnaby, BC. Most recently, he was President and CEO of the BC Technology Industry Association.

Born in Switzerland, the 51-year-old Spothelfer graduated with a law degree from the University of Basel, where he also completed his PhD in Law. He received his MBA from INSEAD in Fontainebleau, France.